TORONTO and NEW YORK, Nov. 5, 2019 /CNW/ - Mountain Province Diamonds Inc. ("Mountain Province", or the "Company") (TSX and NASDAQ: MPVD) today announces its financial and operating results for the third quarter ("the Quarter" or "Q3 2019") and nine months ended September 30, 2019.  The Company also provides an update to its full year 2019 guidance.  All figures are expressed in Canadian dollars unless otherwise noted. 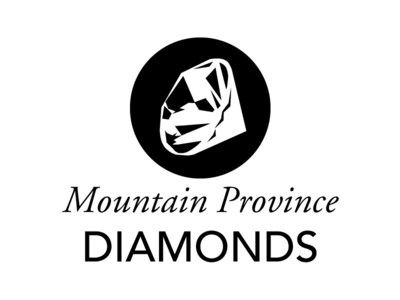 The Company's year to date sales results are based on seven full sales and partial payment received for sale #8, due to timing of the last sale in relation to the close of Q3 2019 financial reporting period.  Full payment for sale #8 has been received and the remaining balance will be reflected in the sales results in Q4 2019.

The Company's medium to long term outlook for rough diamonds remains positive.  The major producers have reported lower levels of sales in recent months, and this is helping normalise inventory levels in the cutting centers.  In addition, anticipated mine closures over the next 12 – 18 months should also help improve the supply and demand balance in the market.  More importantly, consumer confidence and spending, particularly in the US, which makes up for 40 – 50% of the overall diamond jewelry market, is still strong.

The Company's production results reflect 32 million total tonnes mined, 7% higher than the same period last year.  Total carats recovered and grade were 10% and 17% lower than the same period last year, slightly below the Company's expectations. The lower grade and carats recovered year to date, as stated in previous announcements, are driven by the grade and carats associated with the source of ore feed for each period.  The lower grade and carats recovered in 2019, is primarily due to the mining and processing of lower grade ore tonnes from the 5034 South West Corridor (SWC), in addition to larger volumes of ore tonnes mined and treated from the 5034 Center Lobe, which is the lowest grade part of the 5034 kimberlite.  Weather and equipment related challenges faced during the winter months further affected the mine sequencing for 2019 and limited the operations ability to optimize the blend of the feed to the plant.  The shortfall in higher grade and quality ore tonnes mined for the year will be recovered in 2019, with the ability to feed the plant with higher grade ore.

"2019 was always going to be a difficult year in the Life of Mine Plan due to the fact that we were largely mining the lower grade and quality areas of Hearne and 5034 South West Corridor (SWC).  Operational delays encountered in the first half of the year further impacted our ability to find a better blend of feed to the plant as shown by grade underperformance year to date.  Despite this we expect 2019 to finish ahead of expectations and achieve all our guidance metrics.  With the exception of the grade for the most recent quarter, GK is performing to plan and all other mining and processing metrics are trending higher on a year over year basis.  The GK mine has extracted 7% more total tonnes and the plant has treated 8% more tonnes than what was achieved in the same period last year.  Q4 2019 is also trending positively, as access to the higher-grade blocks of the orebody has been re-established.

The Company's diamond sales were in line with expectations considering the expected poorer product mix; which is a creditable performance given the challenging rough diamond market.  The rough diamond market remains tight. The Company's medium to long-term view of the market remains positive. The major producers have seen reduced levels of sales in their recent rough diamond sales events and this, together with the closure of older mines, should have a positive effect on the supply side of the market in 2020 and beyond and should help to restore confidence across the diamond pipeline. At Mountain Province Diamonds, the focus of our efforts will be the continuous improvement of our operations and maximizing free cash flow generation."

The following table summarizes key operating statistics for the Gahcho Kué Mine ("GK mine") in the three and nine months ended September 30, 2019 and 2018.

Full details of the financial and operating results for the quarter ended September 30, 2019 are described in Mountain Province's unaudited condensed consolidated interim financial statements with accompanying notes and related Management's Discussion and Analysis.  These documents and additional information on Mountain Province are available on the Company's website at www.mountainprovince.com and on SEDAR at www.sedar.com and on EDGAR at www.sec.gov/edgar.shtml.  Shareholders may contact Mountain Province at 161 Bay Street, PO Box 216, Toronto, ON, M5J 2S1, to request, free of charge, hard copies of the unaudited condensed consolidated interim financial statements and related Management's Discussion and Analysis.

The Company will host an earnings conference call for analysts and investors on Wednesday, November 6, 2019, at 11:00 a.m. Eastern Time.  The conference call can be accessed using the following details.  A replay of the webcast and audio call will also be available on the Company's website.

Mountain Province Diamonds is a 49% participant with De Beers Canada in the Gahcho Kué diamond mine located in Canada's Northwest Territories.  Gahcho Kué is the world's largest new diamond mine, consisting of a cluster of various diamondiferous kimberlites, four of which are being developed and mined under the current mine plan. The Company also controls 67,164 hectares of highly prospective mineral claims and leases immediately adjacent to the Gahcho Kué Mine that include an indicated mineral resource at the Kelvin kimberlite and inferred mineral resources for the Faraday kimberlites.

The disclosure in this news release of scientific and technical information regarding Mountain Province's mineral properties has been reviewed and approved by Keyvan Salehi, P.Eng., MBA, and Tom E. McCandless, Ph.D., P.Geo., both Qualified Persons as defined by National Instrument 43-101 Standards of Disclosure for Mineral Projects.

Factors that could cause actual results to vary materially from results anticipated by such forward-looking statements include variations in ore grade or recovery rates, changes in market conditions, changes in project parameters, mine sequencing; production rates; cash flow; risks relating to the availability and timeliness of permitting and governmental approvals; supply of, and demand for, diamonds; fluctuating commodity prices and currency exchange rates, the possibility of project cost overruns or unanticipated costs and expenses, labour disputes and other risks of the mining industry, failure of plant, equipment or processes to operate as anticipated.

These factors are discussed in greater detail in Mountain Province's most recent Annual Information Form and in the most recent MD&A filed on SEDAR, which also provide additional general assumptions in connection with these statements.  Mountain Province cautions that the foregoing list of important factors is not exhaustive.  Investors and others who base themselves on forward-looking statements should carefully consider the above factors as well as the uncertainties they represent and the risk they entail.  Mountain Province believes that the expectations reflected in those forward-looking statements are reasonable, but no assurance can be given that these expectations will prove to be correct and such forward-looking statements included in this news release should not be unduly relied upon.  These statements speak only as of the date of this news release.